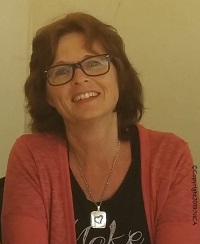 On behalf of the joint team of HWMCO-Nederland & NiCA Foundation, I warmly welcome you on our website!

Uganda, which is officially called the ‘Republic of Uganda’, is located in Eastern Africa. It is bordered to the east by Kenya, to the north by South Sudan, to the west by the Democratic Republic of the Congo, to the southwest by Rwanda, and to the south by Tanzania.

The country is rightly called the ‘Pearl of Africa’! The soils are very fertile and nature is overwhelmingly beautiful; the climate is comfortable with an abundance of sunshine and from time to time some refreshing rainfall. Once you move outside the cities, you find matoke (green banana), coffee, sugarcane, tomato, and cabbage cultivated everywhere. Also, wherever you go, you see popo trees, jackfruit trees, avocado trees, pineapple plants, and other crops. Everywhere along the road are small local markets where the fresh looking fruits and vegetables are sold.

Sadly, Uganda still to this day belongs to the poorest countries in the world. During the summer of 2016, I made my first trip to the country, accompanied by my husband and youngest daughter. It was a tough confrontation with the poverty that prevails in the country, which is currently home to an estimated 46 million people (2021). The Ugandan population is known to be the youngest in the world with 48% aged between 0-14 years and 78% younger than 30 years. The fact that there is a huge number of children in Uganda that would enormously benefit from a better future perspective for them will not need much explanation.

Heart breaking is the fact that far the majority of the Ugandan rural population (75%) has no access to safe drinking water, as much as water is even known to be the source of life. For water, the people depend on small lakes that often contain ditch-water. Often, they have to walk several hours to reach a place where they can fill their jerry cans with contaminated water. Most often, it is the children who are being sent for this task. Not only is it extremely heavy for the children to carry a water filled jerry can back home, also it unfortunately means that they are structurally missing many precious hours at school. The countless amounts of bacteria that contaminate the water hugely affect the overall health of the rural population and causes that they cannot function well in their daily lives. 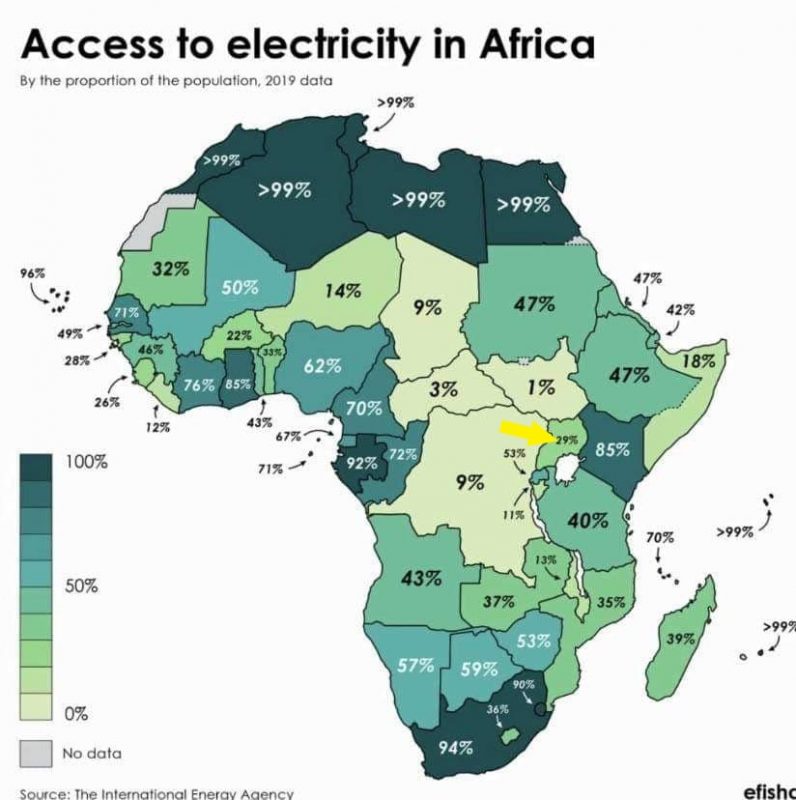 Unfortunately, the lack of safe drinking water is not the only problem the children in Uganda are facing. Their poor living circumstances are the result of a combination of many development blocking factors. Among them is also the fact that, as the picture on the right shows, only 29% percent of the population has access to electricity (2019). In practice, this simply means that they are devoid of light from 7 p.m. to 7 a.m.; reading or making homework is therefore not possible for far the majority of the population during the evenings. Also, as can be read in this article about Ugandan’s school system, many children cannot attend school. In 1997, primary school education was promised to be free to attend for all children, but in reality it is nothing like that. English is the official language of the country, but with far the majority of the children not receiving proper education, they simply don’t master the language, which leads to them (as well their parents or caretakers, who also never received good education) missing out on a lot of information that is spread in English. Also, because of the general lack of education, important knowledge about how to cultivate crops successfully is absent, with all its consequences. Malnutrition is very often seen. Also HIV/AIDS is still often seen in the population; sexual abuse of young children, arranged marriages, teenage pregnancies and alcoholism are some of the many other widespread problems in the country.

As the joint team of HWMCO-Nederland & NiCA Foundation we work to improve the conditions described above, whereby the main focus is on children in the area around Lake Bunyonyi, which is located in the most southwestern part of Uganda. Our strategy is to invest in tools and facilities as well as to bring awareness in such ways that large groups of children can benefit. Examples of that are our motorboats, our Swimming Instruction Center and the rainwater collection systems that we construct. In all that we do we ask involvement and commitment of the local population. Not only do we ask them to contribute their part where that can reasonably be expected, also we want to work in good togetherness towards more self-sustainability for them. You can give a hungry man a fish and feed him for one day, but you can also teach him how to fish and feed him for a lifetime.

Please visit our page ‘Current Goals’ to learn about specific goals to which we are currently committed and for which of course funds need to be raised. In ‘News’ we always share latest updates about our projects and activities. Of course, we count on your trust and support, so that we can provide many innocent children the worthy future that they deserve.

Last but not least I would like to give the following words into consideration: if the rich from societies all over the world (!) would be willing to reduce ‘abundant’ to ‘enough’, then ‘shortage’ for the less fortunate would no longer have to exist.