Who has ever visited Lake Bunyonyi in southwest Uganda will have noticed that it is a most beautiful and pristine place where, to this day, traditional dugout canoes are commonplace. They are used for transport of people and materials, and also for fishing, especially crayfishing, which is done nearby the banks. For me, especially when on the lake during early morning hours, when the light is somehow magical and only some locals peddling their canoes can be spotted, the serene atmosphere the scenery breathes reminds me of that in Disney’s fairytale Pocahontas.

Worldwide, dugout canoes are even the oldest boat type found by archeologists; an 8000 year old sample, which is the third oldest worldwide was discovered in Africa (Nigeria). The well-watered tropical rainforest and woodland regions of sub-Saharan Africa provide both the waterways and the trees for dugout canoes.

At Lake Bunyonyi, which is part of the working area of HWMCO-Nederland & NiCA Foundation, although there is an increase of motorboats used for transport purposes, it’s a fact that the majority of the people cannot afford the luxury of a motorboat. Of course a motorboat is much more safe and also much faster than a dugout canoe, but it’s also much more expensive and it structurally needs fuel. As to this day, still a considerable part of the poor local population completely depends on the traditional canoes as their daily transport means. Sheer poverty even forces families to share canoes.

Over the last months, we have from nearby followed the steps of the construction process of two dugout canoes (both made from the same big tree) from start to finish. Building a good canoe is an art in itself and requires real craftsmanship! Altogether, the process takes a few months and encompasses the following steps:

Finding a suitable tree and cutting it.

Trimming and debarking the tree followed by hollowing out the wood with a chisel and other tools.
(photos are clickable) 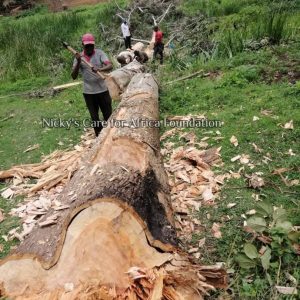 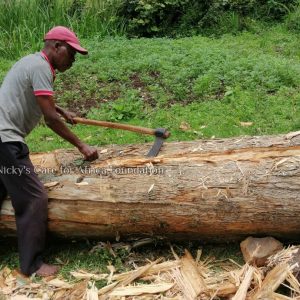 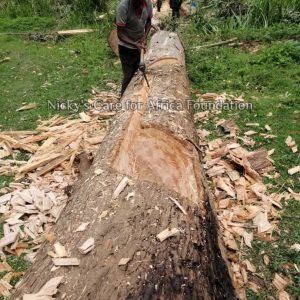 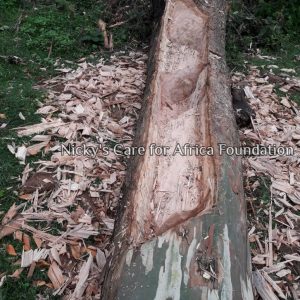 Carrying the canoe(s) to the water. As for the specific situation at Lake Bunyonyi, this was a very heavy task that needed a lot of manpower. Yet, this was no problem at all! To a community, it means a lot when new canoes, locally the most import means of transport, are introduced; helping to carry them the long way down the hills to the water is how they can contribute. While doing so traditional ways of communicating, using so called ‘trumpets’ made from the horns of male water bocks, were used to notify the people that something good was going on. Please view in the video below how it was done.

The photos below clearly show the difference in how the canoes are in the water during the first test and after finalizing them.

When this final phase is completed the canoes can eventually, after they have been drying for some weeks, be painted according to ones choice.

More videos of the construction process are posted in our video section.

NB: are you interested in receiving the latest news from our website? Please let us know by leaving your name and e-mail in a comment below. You will always receive the links to last posted articles in an e-mail, whereby your data will of course remain private.