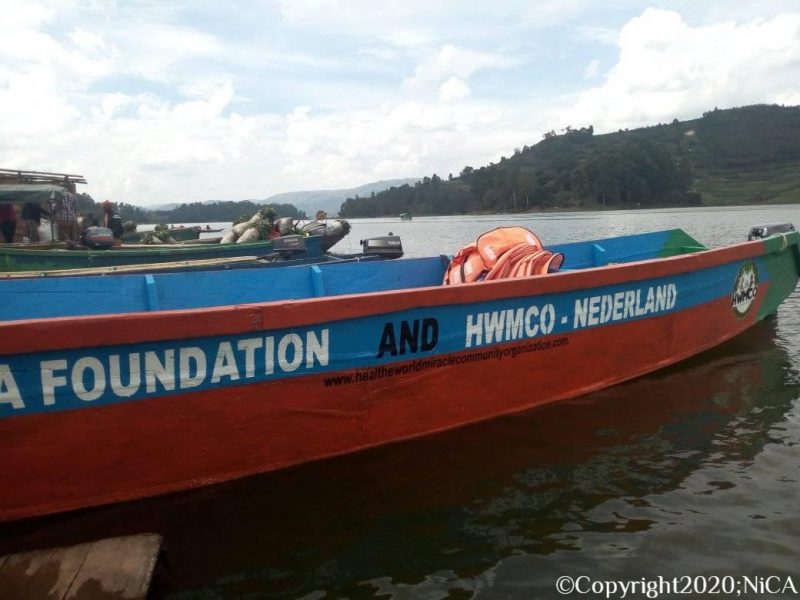 On January 15th, NiCA  Managers Aaron and Noah were with others working on the construction of the recently to our Swimming Instruction Center added covered area when they suddenly heard a loud call for help from the community. It turned out that a dugout canoe had capsized with the two people who had been on board of it, being at acute risk of drowning.

Gilbert Twinamasiko (27) and his mother (52) were on their way back home after gardening work. In the canoe, which they had borrowed, they were carrying the crops they had just harvested (egg plants, cucumbers, beans and potatoes). While they were moving over the lake, the weather circumstances suddenly changed and the lake became rough. Under those circumstances the canoe capsized and sank with all the harvested crops, leaving Gilbert and his mother in big need of help.

Following the urgent call for help from the community the team hesitated no second; they immediately took off with the motorboat and succeeded in rescuing the two in need. Noah recalls how they found Gilbert trying hard to prevent his mother from drowning with the help of a handed paddle, while he himself also tried to stay above water. Noah thanks the entire team involved with the rescue.

The weather circumstances at Lake Bunyonyi are known to be erratic. Within a few minutes they can change from calm and sunny to windy and rainy. Under bad weather circumstances the lake tends to become rough and causing a dangerous situation for people who are at that time moving on it in dugout canoes. Statistics show that every month at least three people drown in the lake; it is hard to find someone in the area who has not lost a dear one to the lake. Lake Bunyonyi is the deepest lake of Uganda and the second deepest of all Africa. The local population depends on the lake for transport while they at the same time fear the water. Far the majority cannot swim.

Dugout canoes are, still today, the traditional means of transport for the local population, as can be seen in the slider below:

As the joint team of HWMCO-Nederland & NiCA Foundation we are offering help. In Oktober 2018, we have provided a motorboat to guarantee the daily safe transport to and from school for pupils of Bwama Primary School; in September 2019, we have built a Swimming Instruction Centre from where we offer swimming lessons. In the future the drownings on the lake shall more and more belong to the past.