During our recent long stay in Uganda, we have of course also visited Bwama Primary School, the government school we are currently supporting under NiCA Foundation, several times. On one occasion we had a meeting with the entire team of the school, the PTA (Parents Teachers Association) Chairman, and the Chairman of the School Management Committee, during which we evaluated the help brought by us so far (a big canoe in 2017, a first motorboat in 2018 and 5 landing docks early 2019) and discussed our mutual current and future goals; during the meeting, we also learned more about the administrative hierarchy of the school and everyone’s roles and competences.

Of course we made sure to spend times with the children of the school also. Together with the headteacher of the school, Mr. Kanyoma, we had scheduled a day to visit and organize activities for them. The day, which turned out to be a beautiful sunny day, started with an official welcome outside, where Mr. Kanyoma warmly welcomed us in front of all the children, who were visibly excited. After the welcome speech of the head teacher, we divided the children into three groups for them to be offered different activities. 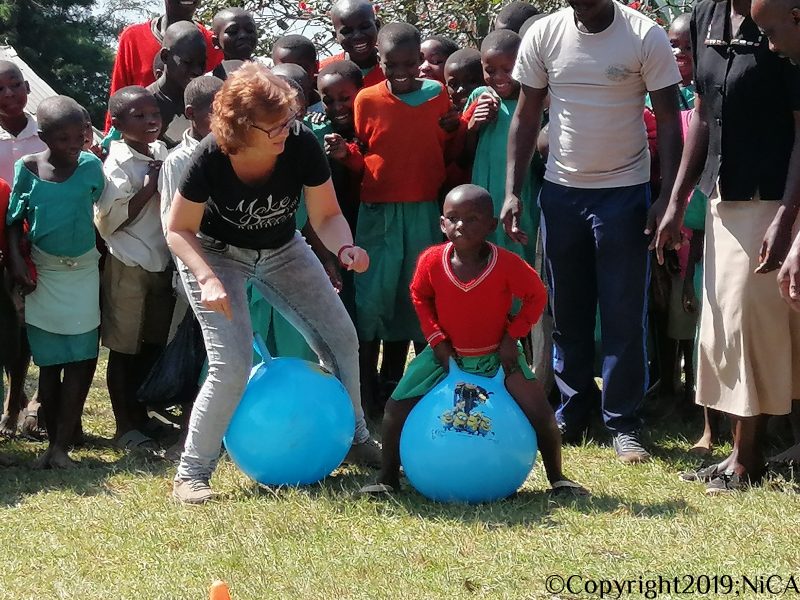 To amuse the youngest children (P1,P2 and P3) we had brought two skippy balls, for several perhaps better known as Hoppity Hop, from the Netherlands, which they had, not surprisingly, never seen before. Already while we were walking the way from the boat to the school we had noticed some of the children hanging out of the window of their classroom, screaming out loud, “wow, they have brought balloons!”. But we weren’t coming with balloons as they would find out soon…After they had been explained how to use a skippy ball, some of the children were asked by their teachers to try it for themselves, which, as can be seen in the photos in the slider below, caused hilarious laughing amongst those who were watching. Yet, they all got opportunities to try it for themselves and to move over a small traject pointed out by pawns. At the end of the day, we have left the skippy balls behind at the school for the children to enjoy playing with them during breaks. 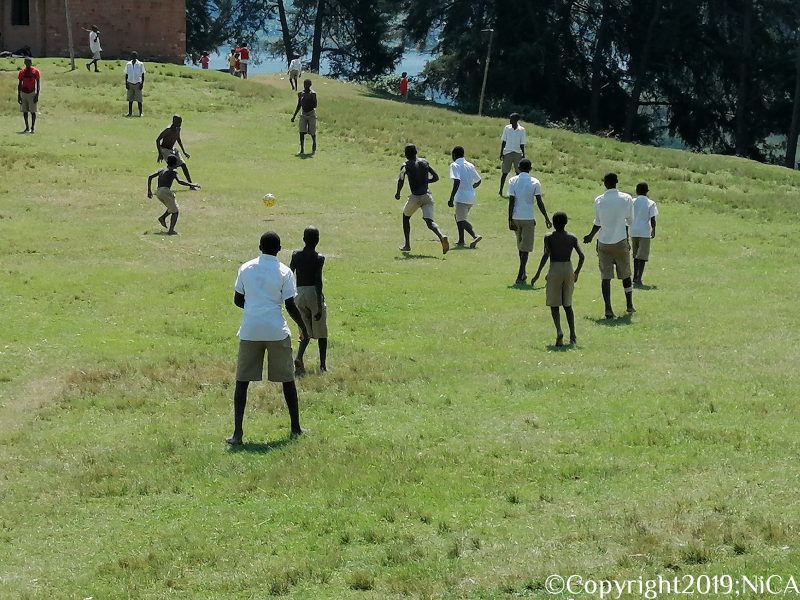 The oldest boys (P6 & P7) were handed a brand new soccer ball that we brought. Soccer is also in Uganda a very popular team sport amongst the youth (mainly boys), so the ball was welcomed with great joy, as it could replace an old and damaged ball that was held together with strings and elastics. The boys immediately started playing with it and were having a great time. 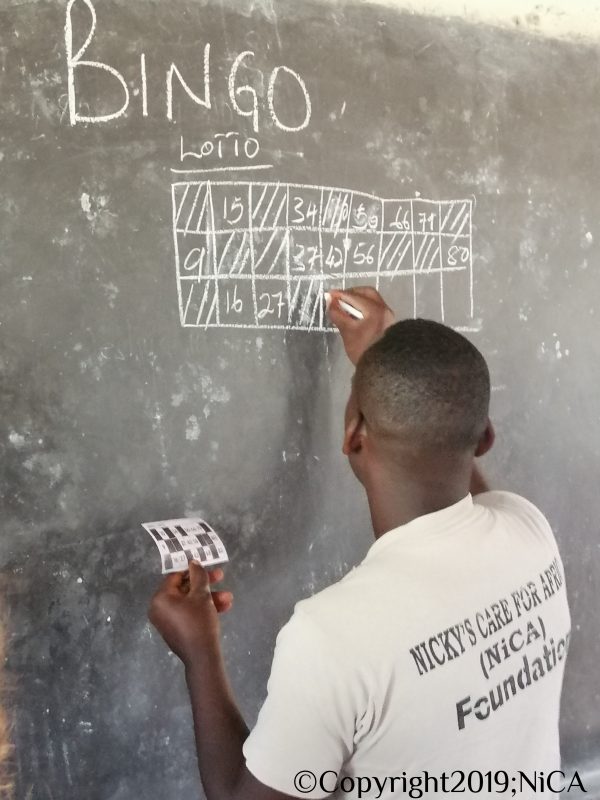 The remaining children (P4, P5 and girls from P6 & P7) were amused inside with a bingo game, which we had also brought from the Netherlands. With this, like the skippy balls, being completely new for them, it needed to be explained at first of which Noah and Aaron took care. As the photos show, the children, with big smiles on their faces, became very focused on the game. Also the headteacher enthusiastically joined them and visibly liked the game! Every time when children shouted to have bingo, after having checked if they had played it well (which was pretty much always the case), they would be rewarded with a pen, which was very much appreciated by them, as much as it is, still today, not a matter of course for poor children in Uganda to possess materials such as study books, notebooks, pens, pencils, or even to go to school in the first place!

Overall, every time again, it hits me hard to see so clearly how much the world a poor Ugandan child grows up in differs from that of a Dutch (read: Western) child. It is simply heartbreaking. When writing the introduction for this website I concluded by giving the following words into consideration: if the rich from societies all over the world would be willing to reduce ‘abundant’ to ‘enough’, then ‘shortage’ for the less fortunate would no longer have to exist. There is so much truth in those words! It is so easy to simply look away from the poverty in countries like Uganda. Yet, I can assure that watching it on a tv screen while enjoying a nice cup of coffee, where you can simply switch a button and change the channel, is really not the same as traveling there and see it with your own eyes…. 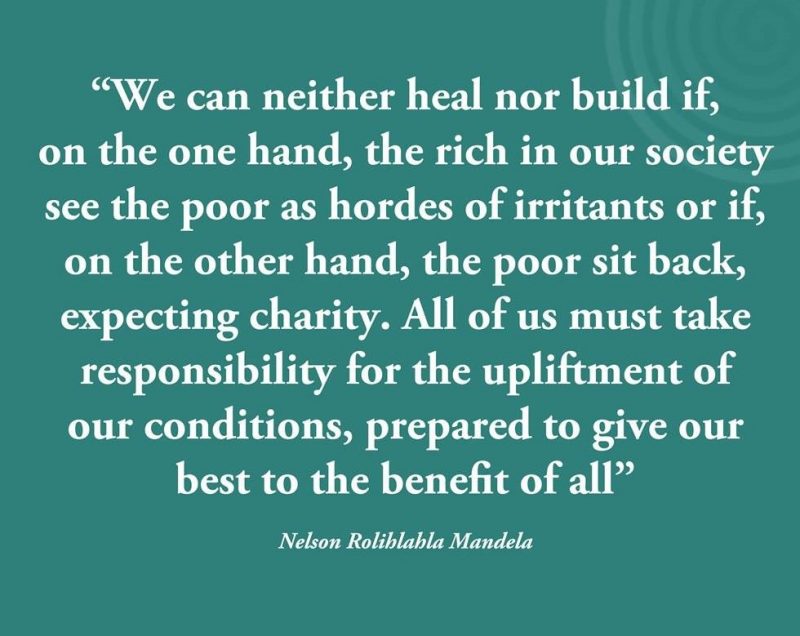 At the same time, I strongly support that help must be brought in responsible, well thought, ways and also that it needs for local communities to be made aware of their own responsibilities in this, as much as those responsibilities are of course there. Please also visit the page ‘What We Stand For’ on this website to learn more about our principles. In this regard, there is also a statement from late Nelson Mandela, where he said, we can neither heal nor build if, on the one hand the rich from our society see the poor as hordes of irritants or if, on the other hand, the poor sit back, expecting charity. We must all take responsibility for the upliftment of our conditions, prepared to give our best for the benefit of all. I completely agree with his words!

After finishing the activities for the children, we provided them all a piece of cake from which we knew how much they just loved that, as they had very much enjoyed it during my visit last year. Then, all the children gathered outside again where Mr. Kanyoma thanked us for the wonderful time spent with them. Aaron and I took this opportunity to address the children about the absolute importance of attending primary school for them. Sadly, there is a group of children that drops out of primary school for several reasons. Some of them are encouraged by their environment to leave school and to start earning some money, others see themselves confronted with problems keeping up with the pace of the learning programs, while another group drops out because of financial problems. 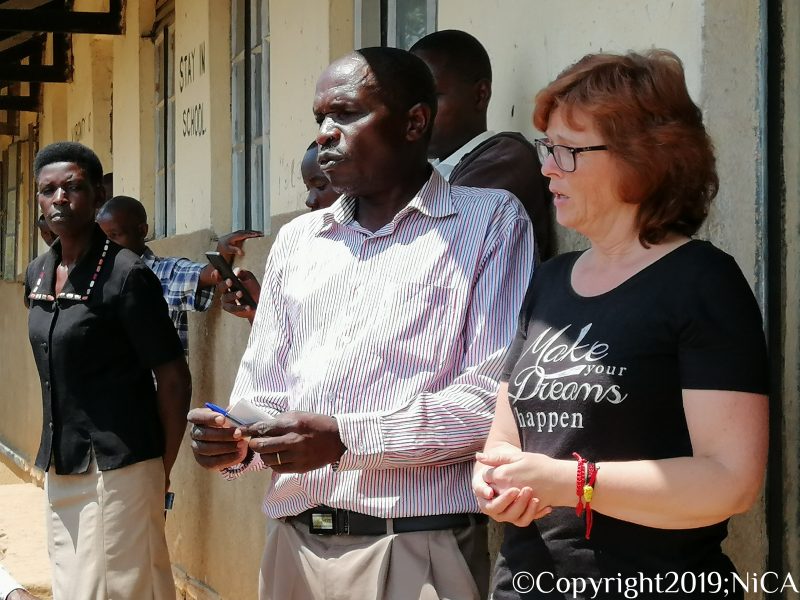 I asked the older children to read the text on my T-shirt which said ‘Make your dreams happen’. I then explained them the deeper meaning of those words and that it is really possible for dreams to come true, if you just never give up on them. Then I advised them to start thinking about what they are really good in or what they like to be busy with, because that may help them to find out for themselves where their talents are and what kind of job could fit them; by doing this I was trying to encourage them to start dreaming about their futures.
Aaron and I both emphasized that, for them to succeed building themselves a worthy future, it is essential for them to obtain their primary school certificate in the first place. As also explained in this previous article about the school system in Uganda, to obtain this certificate is really of essential importance for any future opportunities. If children can after that get an opportunity to take part in vocational education, they greatly increase their chances of finding a job and being able to build themselves that worthy future.

All the children were now instructed to go to their classrooms to be taught for the remaining few hours of that day; we were about to leave the school in the company of Mr. Kanyoma, whom we had invited for a lunch, but we only did so after having visited all the children once more in their own classrooms to surprise them a little sweet that we brought from the Netherlands. 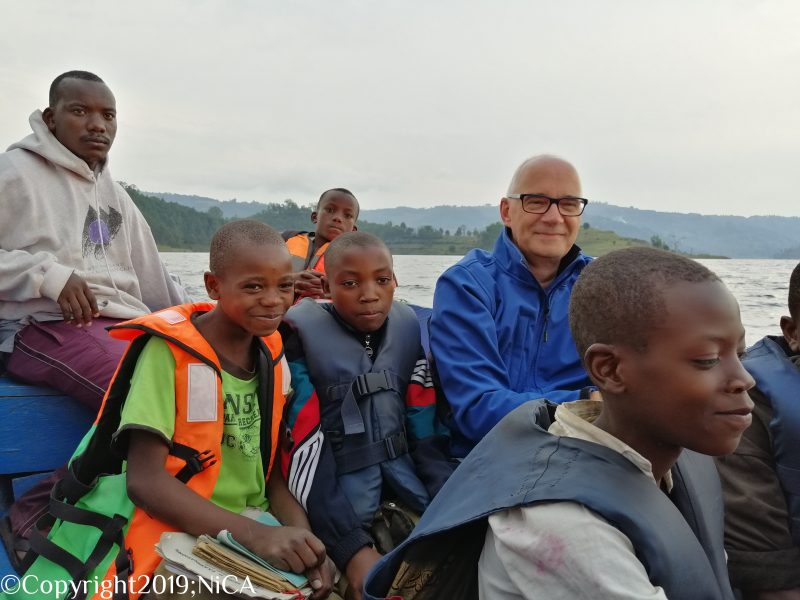 Last, but not least, we of course also wanted to experience the daily journey of safely transporting the children over the lake with the motorboat that we provided the school in October 2018. While we had already during the first days of our stay in the area visited the five by us constructed landing docks, we were also looking forward to take part in the actual transport of the children. So, we chose an afternoon to do so and made sure to be waiting for them in the boat when they were ready to go back home. The children were visibly happy to see us again.

It was amazing to experience how fast and smoothly this all went! Both boarding and disembarking the boat went according to well-known and followed instructions, making sure that the boat would remain stable in the water. The route that the boat made was carefully thought out to guarantee efficiency, both in time and use of fuel. The first group of children that boarded was taken to the next island, a pretty long but narrow island, for them to cross that by foot and to be picked by the boat again at the other side of it. While those children were crossing that island, the boat went back to school twice to pick other groups and transport them directly to their villages, the location of the last of which made it possible to continue the journey around the island that the first group of children were crossing by foot. By the time we arrived there, they were waiting for us. From there also they were further transported to their home village. The whole journey of transporting the children lasted about 40 minutes.

Please enjoy the photo slider below that shows photos from the wonderful times spent with the children!

Please stay tuned for more reports about our activities during our month stay in Uganda to be posted soon!

To find out in what ways you can help us achieve our goals, please visit the section ‘How You Can Help’ on this website.

NB: are you interested in receiving the latest news from our website? Please let us know by leaving your name and e-mail in a comment below. You will always receive the links to last posted articles in an e-mail.