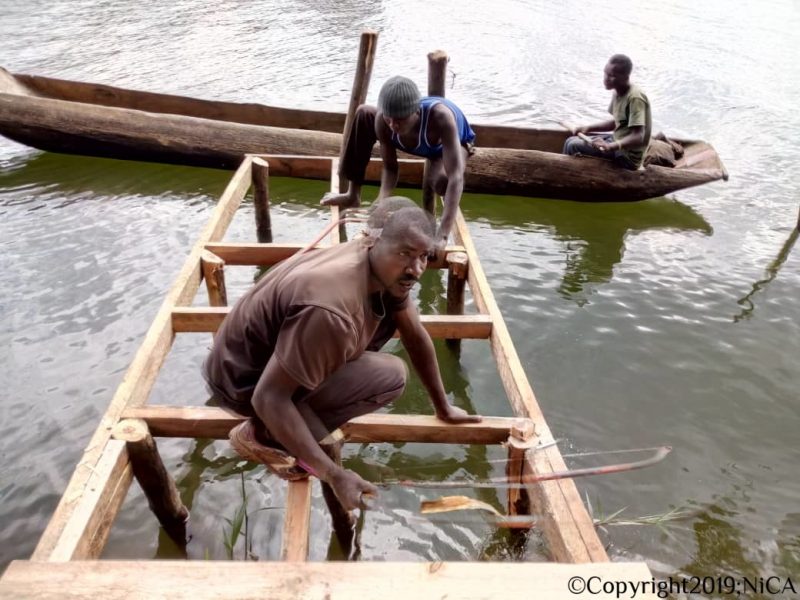 These last days, a hard working team, including also NiCA Managers Aaron and Noah, has constructed the last two out of the five much needed landing docks to facilitate the boarding and disembarking of the motorboat that safely transports the children of Bwama Primary School over Lake Bunyonyi every day.

The motorboat, that was provided in October 2018, is much more safe and much faster than the formerly for the transport of the children used canoes. Yet, because it is also much higher, it is difficult for the children to board and disembark it without the presence of a landing dock. Also, having to push the boat back into the water from the banks, even several times every day (!), turned out to be a heavy task. As there are five places where the children of Bwama Primary School gather in groups every school day, for them to be picked up by the boat in the morning and transported back every in the afternoon, there was an urgent need for landing docks in these places.

With the first two landing docks having been constructed in January of this year and the third in April, we are very grateful that also the last two could now be realized! It means that the children can from next, when they return to school after a well-deserved holiday, easily board and disembark the boat in all gathering places.

The photo slider below shows the construction process of the last two landing docks:

Worth mentioning is also that all five over the months constructed landing docks will not only be used by our first provided motorboat, but also any other boat or canoe in the area can use them for short time mooring.