Earlier this year I posted the article, Living on the Edges of Ugandan Society: the Batwa, on this website. As I was aware of a few groups of this tribe, that belongs to the oldest surviving tribes of Africa, living at or near Lake Bunyonyi, I just had to visit at least one of them while spending time in this amazingly beautiful area where we have founded NiCA Foundation.

We had planned our visit on a day that turned out to be a cloudy day, but with the area having received quite some rain on the previous days, we were grateful for the weather gods being with us as they were, even giving us a bit sunshine now and then. 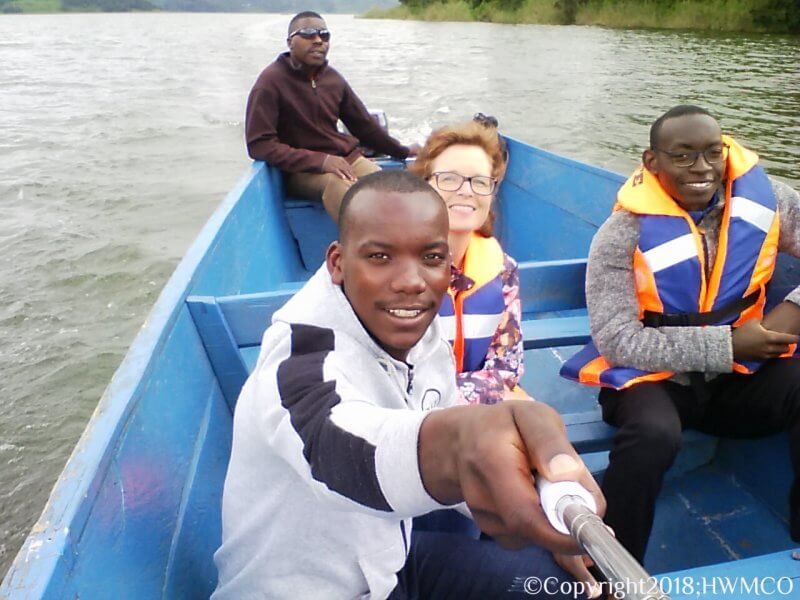 With our NiCA Manager, Noah, who is also a very experienced tour guide, of course accompanying us, it took us about an hour sailing over the lake with a motorboat to reach our destination. On the way we passed people moving in their local, dugout canoes and with there being a strong wind, I could see their struggle while peddling their vessels. It made me again realize the dangerous situation for the children of Bwama Primary School, having to cross the lake every day that way while traveling to and from school under all kinds of weather circumstances!

This journey over the lake has been the furthest I have made so far and I have so incredibly enjoyed every minute of it! The lake is surrounded by pretty high hills and wherever you look, you find a variety of nature and cultivated crops. The most beautiful flowers grow on the banks and the islands, and small birds, to which Lake Bunyonyi thanks its name, can be spotted continuously. Lake Bunyonyi means, ‘place of many little birds’. Every now and then we would also spot a couple of Crested Cranes, one time even in the company of a few young ones!

Suddenly, my eye fell on a point far ahead of us, where I distinguished between eight and ten figurines, quickly moving down a pretty high hill. While moving closer, Noah explained that this was a group of mainly Batwa children, who had seen our boat approaching already from far and, while realizing that they were going to have visitors, were now coming down from their settlement to welcome us! Noah prepared us for what would come next. I would be handed a stick that would be of help for me while climbing the hill up to the settlement of this Batwa group. The children would accompany us up the hill and later also down the hill again, of course hoping to be rewarded for that with a small amount of money. When we had come closer to the children, all of them boys, I noticed that they had been speeding down the hill even barefoot!

The boys were waiting for us at a landing place. As enthusiastic as they were, they could hardly wait for our boat to be moored. It went as Noah had explained and before we realized we found ourselves all in a row climbing the steep hill, that turned out to be pretty slippery due the rain that had been falling over the last days. In the left hand I was holding the stick that I was handed, and for which I was very grateful, because of the great amount of support I felt it gave me. Yet, I was also incredibly overwhelmed by what was taking place at my right side….One of the young boys had come walking next to me and had taken my hand. He was holding it gently, but at the same with such a tight grip, that I felt completely safe while climbing this steep and slippery path. This was definitely not the first time he was doing this! A moment of looking behind me learned me that the others were receiving the same support from other boys. Never before had I experienced a heartwarming gesture like this and I was deeply touched! The boy next to me seemed to understand a few words English and when asked for his name, I understood it as ‘Anson’. Somewhere halfway was a bench where we could rest for some minutes, with some of the boys joining us. All together it took us about half an hour to reach the small settlement of this Batwa group on top of the hill. There we found the other members of the group, some of them adults, but the majority children.

We noticed some very simple houses built from wood and clay. A glimpse inside one of them learned me that there was only one room, that didn’t have any furniture; obviously, a whole family would live and sleep together in that one room.

The view over the lake on top of the hill was just amazing, but I wondered how these people must feel during the nights and under cold and rainy weather circumstances with their only shelter being their simple, definitely not windproof, houses. Due to the altitude of this area the climate in this part of Uganda is not the same as in other parts of the country. When it rains it can become pretty cold and also during the nights, temperatures go far down.

As mentioned in my previously written article about the Batwa, after their eviction from the forests, only some of them have been able to develop new means of survival as potters, dancers, and entertainers. Obviously, although living under heart breaking circumstances, this group had succeeded in developing these means. Their beautiful, handmade crafts were displayed and at some point they started singing and dancing what I was explained to be a welcome song for us. It was so wonderful to see also some of the children enthusiastically playing their part in the performance!

After this great performance, and after having made a donation, we decided that it was time to return to our boat. Accompanied all the way down the slippery path down the hill by the same boys and in the same way as they did while we were going up the hill, we reached the boat safely. After of course having rewarded the boys as they were hoping for, they ran up the hill again as fast as we had seen them coming down earlier and we started another wonderful journey over the lake, back to our starting point.

It had been another unforgettable experience!

NB: are you interested in receiving the latest news from our website? Please let us know by leaving your name and e-mail in a comment below. You will always receive the links to last posted articles in an e-mail. Your data will of course remain private.