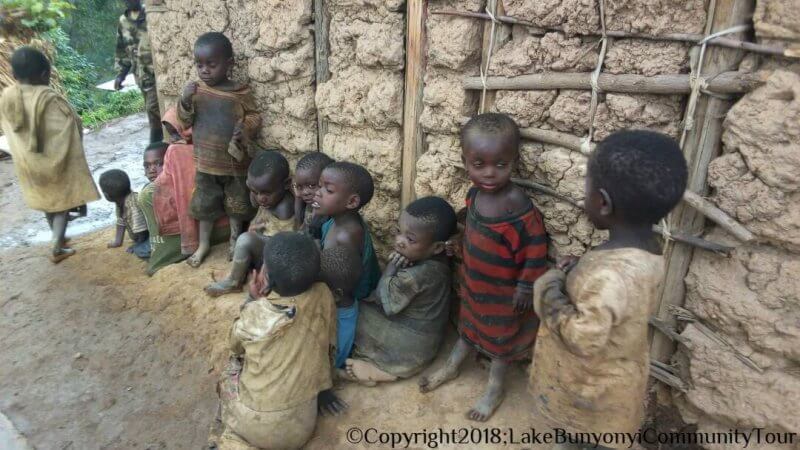 As mentioned in this recently posted article about Mountain Gorillas, conservation projects to protect the animals from extinction had become necessary, but as a consequence people belonging to one of the oldest surviving tribes in Africa, the Batwa, were evicted and denied access to the areas that had until then been their homeland.

The Batwa, many call them Pygmies because of their short body length, are widely accepted as the first inhabitants of the region. Being a tribe of hunter-gatherers, they used to live in caves and trees for more than 4,000 year, sharing the forest with the Mountain Gorillas; until in 1991, due to the conservation projects, their lives suddenly completely changed. In that year, Bwindi Impenetrable Forest was reclassified as a national park and renamed Bwindi Impenetrable National Park, and also Mgahinga Gorilla National Park was created. It was mainly because of the increased risk of infection to the Mountain Gorillas, that share 98 percent of human DNA, that the Batwa were evicted from the forests.

According to Ugandan law, as a nomadic tribe that had never settled in one location, the Batwa had no claim to the areas that had been their homeland for many centuries, and therefore, the Ugandan government had no legal obligation to compensate them with new land; as a result, the Batwa were displaced. Left landless and impoverished, they became squatters living on the edges of society. Only some of them were able to develop new means of survival as potters, dancers, and entertainers, while they entirely depend on tourism for that.

The Batwa live in small houses that usually have only one room and that are too small to accomodate all family members. It is very common to find more than eight people living together in such a small house, not even equipped with seats or mattresses to sleep on.

Still to this day, the Batwa have received little or no compensation for their losses. The Ugandan constitution provides for the protection of the right of minorities, but the situation that the Batwa are living in clearly indicates that their rights are systematically being violated. For example, they lack access to health services offered to other Ugandans by the government and they are the only minority group that is not represented in parliament.

On top of that, because of their former hunter-gatherer lifestyle, dominant ethnic groups perceive the Batwa as uncivilized, which has led to serious discrimination. They are seen as backward and childish, while also considered dirty, ignorant and immoral. Often, they are not allowed to get water from a communal well, and intermarriage with other ethnic groups is condemned; not suprisingly, they have a high HIV prevalence, but access to treatment for it is very hard for them.

Accurate figures are difficult to determine, but in 2015 the number of Batwa living in Uganda was estimated to be around 6,700. They mainly live in the southwestern part of the country. They also live in Rwanda, Burundi, and Democratic Republic of Congo. Statistics have shown that their life expectancy is only 28 years, and four in ten children may day die before their fifth birthday.

Sadly, if their situation doesn’t change, this tribe, representing a most special culture, even belonging to the oldest tribes of Africa, is seriously at risk of extinction.