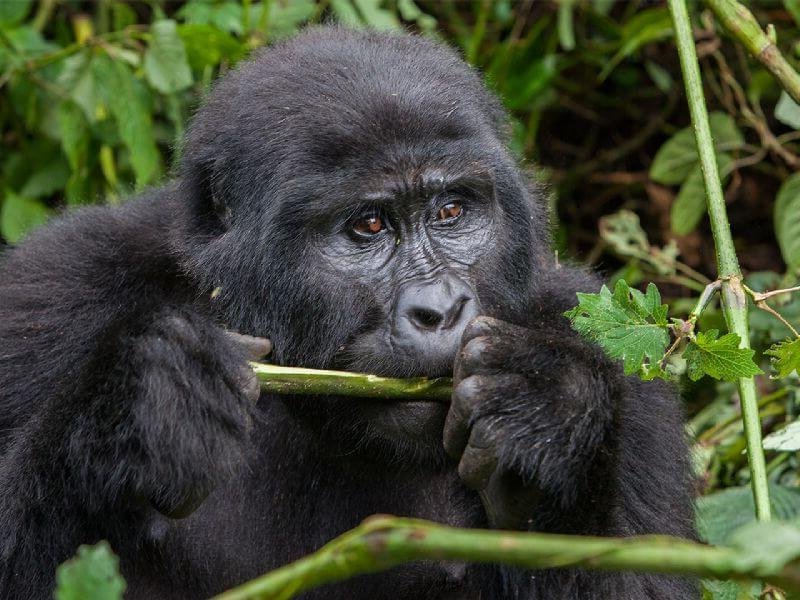 Because of the location of NiCA Foundation at beautiful Lake Bunyonyi, not far away from National Parks where Mountain Gorillas can be tracked, and not in the last place because of the special circumstances that led us to this very area, an article about these wonderful, yet seriously endangered animals cannot miss out on this website!

Uganda belongs to the only three countries in the world where Mountain Gorillas exist. The other countries are Rwanda and the Democratic Republic of the Congo, both bordering Uganda. Mountain Gorillas are the largest of all the gorillas and they are the most endangered. They cannot be found in any zoo in the world, because they do not survive in captivity. In 2013, their number was estimated to be around 750.

Until 1902 the Mountain Gorilla was not even known to exist. No one had thought that any gorillas could exist in high altitudes and a much colder climate than West-Africa, where other gorilla species live. Back in 1902, with Rwanda being a German colony, a man named Kapitän von Berenge was, with some friends, climbing Mount Sabinyio on the Rwanda side of it, and they spotted a group of unknown apes at 2850 meters above sea level. They shoot a young male that was about 5 years old, 100 kilos and not too large, but larger than any apes they had ever seen. It was sent to Germany, where the animal was identified as a gorilla. Very interesting to know is that gorillas and humans are 98% genetically identical!

Although strong and powerful, Mountain Gorillas are generally known to be gentle and shy. They are considered to be highly intelligent, have been observed using tools like other great apes, and communicate using a variety of vocal sounds. Being primarily herbivores, they spend a lot of time eating fruits and leaves. 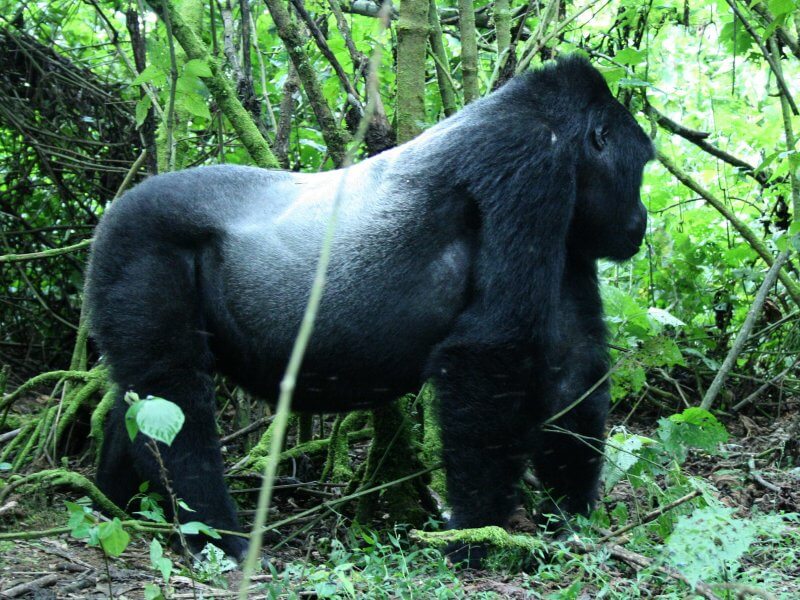 Mountain Gorillas live in close family groups. A typical group contains: one silverback, being a mature male, who is the group’s undisputed leader; one or two blackbacks (also males), who act as sentries; three to four sexually mature females, who are mostly bonded to the dominant silverback for life; and from three to six juveniles and infants.

The dominant silverback generally determines the movements of the group. He leads it to appropriate feeding sites. He mediates conflicts within the group and protects it from external threats. When the group is attacked by humans, leopards, or other gorillas, the silverback will protect them even at the cost of his own life. If a mother dies or leaves the group, the silverback is usually the one who looks after her abandoned offspring, even allowing them to sleep in his nest.

In Uganda, Mountain Gorilla tracking is the most popular tourism activity. No wonder, since from the number of them left in the world more than half can be found in the above mentioned parks in the country. The limited number of groups that can be seen during gorilla trackings are habituated. That means that they are accustomed to people, which is a process that takes about two years.

As Mountain Gorillas do not survive in captivity and with them having become more and more endangered to the point of becoming extinct, due to factors caused by humans, preservation of their habitats became essential for their survival. They were poached, their habitats had been far reduced due to the ongoing cutting of huge amounts of trees, and also, due to wars refugees were entering their habitats. To bring all that to a halt, in 1991 the until then named Bwindi Impenetrable Forest was reclassified as a National Park and renamed Bwindi Impenetrable National Park. Also, the Mgahinga Gorilla National Park was created. The parks are located not far from each other in the south of the country.

Fortunately, this preservation has led to the number of Mountain Gorillas having increased again, but the species is most vulnerable, still today. In Uganda, for Mountain Gorilla tracking $500 must be paid by each tourist. That may sound like a high amount at first, but it must be taken into consideration that it is mainly spent on the conservation of the gorillas.

Sadly, due to the necessary conservation projects to protect the Mountain Gorillas, people belonging to one of the oldest surviving tribes in Africa, the Batwa, were evicted and denied access to the areas that had until then been their homeland. In a soon to be posted article I will explain more about the Batwa and their difficult position.

Update November 2018: the Switzerland-based International Union for Conservation of Nature has updated the status of mountain gorillas from “critically endangered” to “endangered”. There are now just over 1,000 of the animals in the world, up from an estimated population of 680 a decade ago. Measures to protect the mountain gorillas from extinction, together with proceeds from tourism that helps in funding conservation have contributed a lot to the positive result, yet, it is important to note that their numbers could still slip back very quickly, as there are still just two fragile and small populations of them.

NB: are you interested in receiving the latest news from our website? Please let us know by leaving your name and e-mail in a comment below. You will always receive the links to last posted articles in an e-mail.