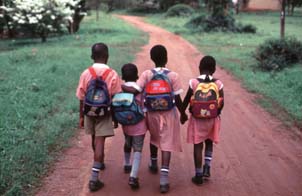 In a poor country like Uganda, it is not a matter of course that each and every child goes to school. Yet, fact is that with the median age of the population, that currently counts about 40 million people, not even being 16 years, millions of children are of school age. Uganda has both government schools and private schools. Sadly, the private schools, which can in general provide education of a higher quality, are only accessible for the rich and the poor completely depend on government schools. In 1997, the Ugandan government introduced what was intended to be ‘free’ primary school. Unfortunately, although the intention had been that many children could from then on receive free education, today, in reality, due to the enormous number of children, ‘free’ has turned out to be far from entirely free. Less than half (40 per cent) of at all school going children are literate at the end of primary school. Children with disabilities are largely excluded from formal schooling because of shortages of special needs teachers and facilities.

Primary School for children starts at the age of 5 and it goes from P1 to P7. The school year starts in February and is divided into three terms at the end of each of which the children receive a school report. At the end of P7, the children must pass a national exam, which is officially called ‘Primary Leaver Exam’. Successfully passing that exam means that children will have access to Secondary School, which goes from S1 to S4 (Ordinary level), followed by Senior Secondary School, from SS5 to SS6 (Advanced level). When they have reached the end of S4, there will be another national exam to pass, from which the ‘Uganda Certificate of Education’ will be obtained, and from successfully passing the national exam from SS6, the ‘Ugandan Advanced Certificate of Education’ will be obtained. After the successful completion of Secondary School, there is the possibilty to go to university or to vocational education.

Sadly, as already mentioned above, even though attending primary school itself is basically free for children, in reality it is not and it causes problems for many families. The sad reality is that there are a lot of additional costs that they still have to pay for themselves, like school uniforms and other materials, such as notebooks, pens, pencils, etc. Also, as good as the initial intentions may have been, due to the enormous number of children of primary school age, they turned out to lack the money to pay all the teachers properly, following which many teachers lost their motivation to teach, with the children being the victims of that; whereby it of course also depends on how much someone is doing his job as a teacher from his heart, but fact is that quite a few government schools struggle with teachers regularly not showing up and/or fleeing into alcoholism. Unfortunately, the enormous government corruption in the country also plays a (growing!) role in this.

Overall, with many families having a lot of children, the parents can often afford for only a few of them to attend even primary school.  Every year, they will have to ask themselves which of their children they can send to school. As for secondary school, less than a quarter (24 percent) of adolescents are enrolled at that level. Early marriage, teenage pregnancy, (sexual) abuse at schools, and financial problems keep many teens, especially girls, away from it. So, although possibilities to go to Secondary Schools and from there to University or Vocational Education are there in theory, the sad reality is that for most children their main concern is to achieve that they successfully pass their ‘Primary Leaver Exam’. To have passed that exam is most essential. If the children can after that get an opportunity to take part in vocational education, they greatly increase their chances of finding a job and being able to build themselves a worthy future.

As mentioned in ‘What We Stand For’, our strategy is to offer help by investing in tools and facilities from which large groups of children can benefit;

Please also visit the section ‘How You Can Help’ on this website to learn in what ways you can help us achieve our goals. 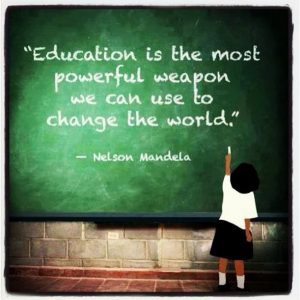 NB: are you interested in receiving the latest news from our website? From now on you can let us know by leaving your name and e-mail in a comment below. You will then always receive the links to last posted articles in an e-mail.